Sanskrit, “the language of the gods,” is essential for any in-depth study of yoga. For the aspiring yoga teacher, familiarity with Sanskrit is no mere window dressing; knowing key terms of the yoga vocabulary with their correct pronunciation deepens one’s practice by opening a door to the vast and profound universe of the yogic sciences. As exploration blossoms into knowledge and then understanding, the firm foundation is created on which a practitioner may begin correctly to transmit the precious teachings of yoga.

Part 1: The Yoga of Sanskrit Study

The course divides into two halves. The first half of the course introduces the unique properties of Sanskrit by looking at a yogic model of learning described in Patañjali’s Yoga Sūtra. In this two thousand year-old Sanskrit treatise, we find directions for cultivating single-pointed focus on any object of meditation – in this case the resonant sounds of the Sanskrit alphabet. Applying this model, the student learns how to bypass and even eliminate compulsive mind-chatter and afflictive, self-defeating habit-patterns that typically sabotage the learning process. Throughout, the main focus will be on locating in one’s own palate the primary sounds of the language – the vowels.

Part 2: The Universe of the Sanskrit Alphabet

From this template of five fundamental vibrations, the entire alphabet emerges as variations on those five. Having experienced the evolution of the Sanskrit alphabet in his or her own mouth, the student is next introduced to the elegant script for writing and reading Sanskrit known as devanāgarī. Alongside, the student learns the Roman letter equivalents for the devanāgarī script. With this, the student can begin to pronounce accurately the Sanskrit words they use every day and to read any Sanskrit word in Roman transliteration. 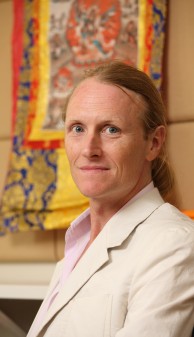 John Campbell, Ph.D., is an Assistant Professor in the Department of Religious Studies at the University of Virginia and the Founder of the Contemplative Sciences Center (uvacontemplation.org), of which he is currently the Coordinating Director of Yoga Programs. He is a longtime practitioner of Tibetan Buddhism and has been practicing Ashtanga Yoga for over twenty years, seventeen of which were under the direct guidance of Shri K. Pattabhi Jois. In 2003 he was honored to become one the few Certified teachers of Ashtanga Yoga worldwide. He lives with his wife and three children in Charlottesville, VA.

ABOUT THE INTERPRETER (Haruka TAKAHASHI) 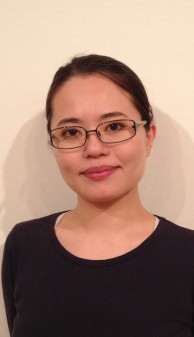 Haruka was first introduced to bodywork at an osteopathy session. She started yoga practice by herself, and cultivated it farther through 200h TTC after the earthquake. Having learned translation from an honorable translator, she started yoga interpretation in 2012. She sees translation as a way of yoga practice and loves to serve as an energy channel between a teacher/author and a class/reader.
【Qualification】
Yoga Alliance 200h TTC
ITM Thai Yoga Bodywork Level 3
Leza Lowitz Restorative Yoga 20h TTC

Book your spot now by sending an email to reservations@beyogajapan.com with the following:

Note: Please be sure to add reservations@beyogajapan.com to your address book and, if necessary, to your safe list so that you can receive our response.

Schedule or other details may be subject to change. Please check our Online Schedule and follow our social media for updates: