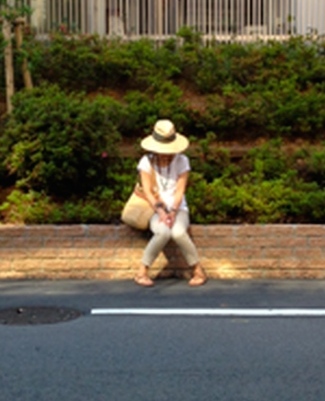 My son, who only comes to Japan in summer, loves Japanese food. He decided to take me to eat Shirasu (whitebait) in Enoshima. We received advice from many people on where to go and looked up what trains to take on Google.

The sun showed its face although it was the rainy season. We set out enthusiastically. I bought and learned how to use a Suica [prepaid ticket] card for the first time at the station. You must not insert it into the slot for tickets. Or rather, you can’t. You can just touch it on the screen as you pass through. I was amazed. Japan is great!

The train came and stopped 2 minutes before its scheduled arrival time. My son and I jumped on together. For some reason, I was thrilled. The two of us sat down slowly, and just as I start reading my book, the conductor’s broadcast began. We realize that we had somehow got onto the express train bound for Narita International Airport. It seemed very unlikely to take us to Kamakura. Chills ran down my back. What should we do?

We got off at the next station. The station staff told us to get on the train after the next one. We were instructed to get on the train that comes not in 2 minutes, but in 4 minutes. And, in exactly 2 minutes a train actually came. I looked at the face of the station staff, and he shook his head to say “not yet.” And 2 minutes later another train came. I looked again at the station staff’s smiling face and this time he nodded. At a station where trains bound for various destinations pass through, I was inspired at how in Japan trains come in exact 2 minute intervals!

We got on the train, and part way it slowed down, and then came to a stop. Apparently there had been a suicide jumper. We arrived at Kamakura much later than expected after all.

As we attempted to go to Hase-dera Temple, there was an announcement at the station that there would be a 90 minute wait. Without hesitation we changed our plan and skipped Hase-dera Temple, and went to the entrance for riding the Enoden line to Enoshima.

As we did, my son and I were stunned. There was a mountain of people. All we could see were human heads. Everybody was waiting for the Enoden. It was stifling. But, since we’d taken 2 hours to come all the way to Kamakura, my son and I joined the queue. Without a word the first train came. We saw people getting on and cramming in. We didn’t intend to ride crammed in like that, but guessed that the next train would be the same.

I look at my son’s face. We both nod in unison and start walking in the opposite direction of the crowd. We don’t like riding crowded trains after all. We didn’t get on. We felt depressed. We were unable to execute any of our plans.

We became hungry and decided to stay for the time being in Kamakura for lunch. For a moment we were in the crowds, but since it was so stifling, we found a street without so many people and start walking down it. Haahhh. Sigh. As we walked along, we noticed a small soba noodle shop with people lining up outside it. My son and I decided to try going there. After 10 minutes, we got inside and my son smiled. There was only a counter, and it could only fit 7 people.

In front of the counter, soba noodles were boiling in a large pot that almost looked like a bath, and next to it was tempura being fried. This old ramshackle shop seemed like it would collapse instantly if an earthquake came. But, for my son, this was an experience he could only have in Japan, and he alone felt inspired.

He’s the type of kid who doesn’t usually drink beer during the day, but cheekily suggested, “Let’s order a beer to celebrate,” and did so. And the soba was so delicious! While eating a large serving of soba with tempura, my son looked really happy. Next he noticed a woman sitting next to us slurping the soba noodles loudly and his eyes become wide with surprise.

On the train back, we talked for what seemed like forever about the soba noodle shop. The dented pot with boiling soba noodles covered by the old wooden lid, the delicious taste of freshly made soba noodles and freshly-fried tempura. We sounded just like a broken record. (I guess people don’t talk about records anymore?) It wasn’t as if it was our first time eating soba, but we were excited about our special experience.

It was a day that did not go at all as planned. But when I recall it, it was actually fun. It’s a funny story now. Although we were unable to eat the famous Shirako of Enoshima, we could experience various wonders of Japan.

I remember “Ishvarapranidhana.” To yield to the forces which cannot be seen. Sometimes no matter how hard you try, with a plan towards reaching a goal, there is always something that happens. But if you accept what happens, life is fun!